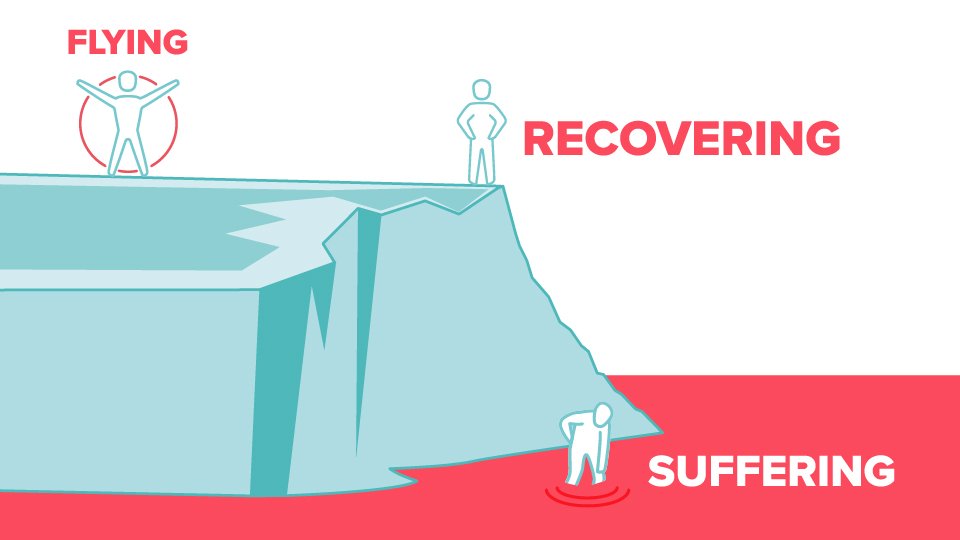 The World Health Organisation defines health as “Health is a state of complete physical, mental and social well-being and not merely the absence of disease or infirmity.”

As stated above, the WHO defines Health as “a state of complete physical, mental and social well-being and not merely the absence of disease or infirmity”.

How can you be healthy one minute?

Is it possible to be healthy one minute and unhealthy the next?  Only in one situation I think.  If you take a look at the Cliff of Health image at the top of the page.  You could be truly flying one minute and suffering the next if you were in a car crash, or some other calamitous accident.  But for most people there is a slow move towards the edge, before the fall.

And unhealthy the next?

The descent to ill-health often feels sudden.  But truly it is – in the vast majority of cases – a gradual process.  But how you feel is different.  You could feel healthy one minute and unhealthy the next.  That’s one of the problems with health.  You could feel great, but actually be harboring some grave disease. Let’s not get too morbid here.  Because you can definitely talk yourself into feeling unhealthy.  In fact you can talk yourself into being unhealthy.  Your mindset can affect your health.

Freddy Mercury was unhealthy, but…

Last night I watched the film Bohemian Rhapsody, the biography of Freddy Mercury, charting the rise and rise of the band Queen.  As someone born in the 1960s, Queen was my favourite band throughout my childhood.

Freddy Mercury certainly appeared to be healthy when he was performing.  And yet, for the last few years of his life, most people would not have described him as physically healthy.

In fact for a lot of his life, most people would not have described him as mentally or socially healthy.

So, I think you can certainly appear to be healthy one minute and unhealthy the next.

But can you feel healthy one minute, and unhealthy the next?

Without a shadow of a doubt.  I’m sure Freddy did.  I know I can.  Pain often works this way.  As an Edinburgh osteopath, I have heard this description thousands of times. “I was feeling fine, then all of a sudden...”

So, even though you may not be healthy, you can still experience moments when you feel healthy.  Music – and particularly Queen’s music – is one way of triggering that feeling.

How to feel healthy

Listen to Queen is my recommendation.  There are many other ways of achieving the feeling.  But, the only way to be truly healthy – physically, mentally and socially – is to move as far back from the edge as possible.  Connect with family and friends.  Avoid hazardous substances (nicotine, excessive alchohol, a lot of medication, etc.).  Move more.  Eat well. Sleep well. Reduce stress.

We have a podcast on low back pain and sciatica.  If you want to understand the descent from no pain to pain, I recommend listening to the first 6 episodes.  They are very short.  Contact us if you want to move towards health.  Back from the edge.

We use cookies to give you the best experience. If you continue using the site we assume you are happy with that.

Here you will find an overview of all cookies used. You can give your consent to whole categories or display further information and select certain cookies.

Content from video platforms and social media platforms is blocked by default. If External Media cookies are accepted, access to those contents no longer requires manual consent.